The EMBA for the future: how Nanyang Business School prepares you for the new economy 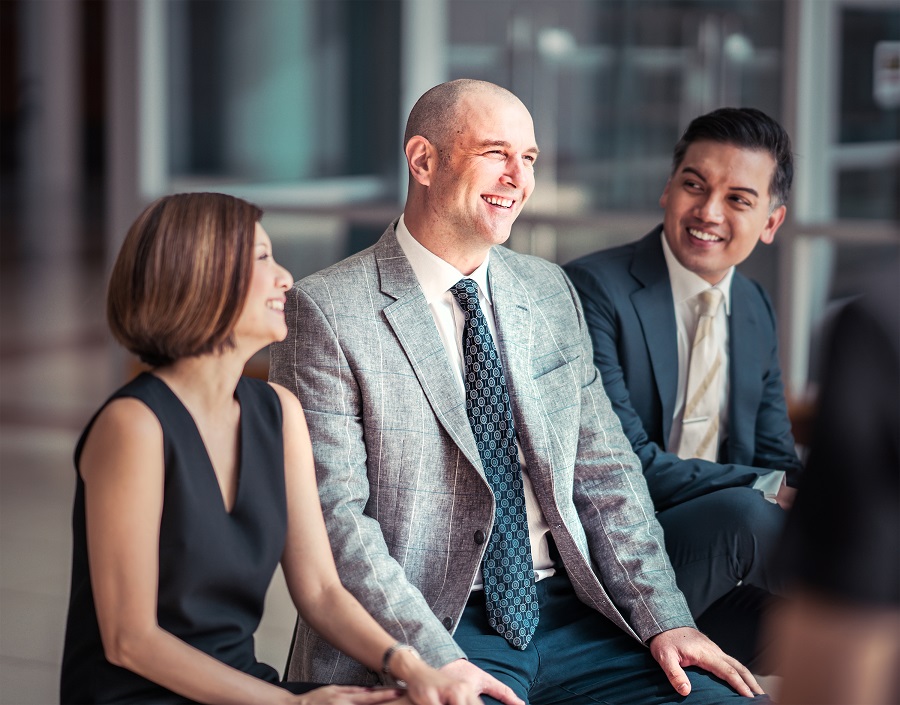 Damian Leach describes his career growth as “exponential” since he graduated from Nanyang Business School’s Executive MBA (EMBA) programme in 2016. As Head of Collaboration and Communications for End User Services at Standard Chartered Bank, Damian now looks after 175 people, covers 200 products, and controls a multimillion-dollar budget. He credits Nanyang Business School (NBS) in Singapore for giving him the skills that propelled him into the next phase of his career, Damian credits the EMBA programme in advancing his career to take on greater responsibilities in the bank.

The degree is uniquely positioned to help professionals make sense of new technologies and how they impact the corporate world. This appealed to Damian when he was researching which Masters qualification to pursue. He had worked in senior technology roles for 15 years in Europe, the Americas and Asia and was looking to transition into a role that controlled budgets and investment decisions, and was far more business focused.

“Back then I needed a broad knowledge of financial budgeting, so I could better understand the long-term business impact of making decisions within my team and firm. Technologists often think in terms of yesterday, today and into the near future, but we rarely consider the financial consequences of our actions over a three to five-year period. Depreciation, amortisation and the future value of money are key in long-term strategic decision making,” says Damian. “I chose the EMBA from NBS because, unlike other programmes, it has both tech and business at its core,” he adds.

Bringing technology and business together

Associate Professor Geoffrey Chua, Academic Director for the Nanyang EMBA programme at NBS, says senior leaders like Damian are increasingly aware that technology and business strategies are becoming intertwined. They want the digital and strategic know-how that will help them stay relevant in their careers, innovate for the future, and drive transformation in their organisations, he says. The Nanyang EMBA is designed with all of this in mind.

The 13-month programme is delivered through five segments of intensive learning lasting about two weeks each. Each segment contains several modules, some of which focus specifically on technology, such as leading business analytics in the new economy, and technology-based innovation and disruption. The Nanyang EMBA’s academic faculty offer a wealth of experience in these and many other fields, with some serving as consultants to prominent firms across an array of industries, adds Geoffrey.

The business school is part of Nanyang Technological University, Singapore (NTU Singapore) – a leading research-intensive public university – and this helps the EMBA programme keep abreast of the latest technologies, says Geoffrey. “NTU isn’t just a full-fledged teaching university, it’s also a world-renowned research university that’s constantly pushing the cutting edge of technology and consulting with industry in areas as diverse as big data, blockchain and renewable energy,” says Geoffrey. “And we deliver this expertise directly to our EMBA classes,” he adds.

NBS also organises “future of technology” talks for its EMBA participants, says Geoffrey. The school invites C-suite leaders and academics from NTU’s own groundbreaking research centres to discuss future trends in technology, such as quantum computing and renewable energy, from a business standpoint.

The EMBA with an Asian edge

Geoffrey believes successful leaders need to be culturally as well as tech savvy. “When you work here in Asia, you have to deal with a diverse range of stakeholders, and you need to be culturally adept as a leader. The Nanyang EMBA provides you with the expertise to navigate the rapidly changing business environment in Asia, with a strong focus on ASEAN countries,” he adds.

Some of the business cases that participants analyse during the programme are produced by the NBS Asian Business Case Centre and examine leading companies in the region. The Nanyang EMBA includes a segment at Tsinghua University in Beijing, which is designed to deepen leadership skills within an Asian context through the analysis of emerging market strategies. Participants also have the opportunity to take classes and experience different pedagogical approaches with the University of California, Berkeley.

As an expatriate in Singapore at the time of the EMBA, alumnus Damian says the emphasis on Asian and global leadership was a big drawcard of the programme. “It wasn’t only the course content that helped me; it was the diversity of my NBS peers, who were business leaders from across Asia, Africa, and the Americas. I learned new ways of thinking from them, as well as the importance of cultural intelligence in decision making. The Nanyang EMBA developed a culturally sensitive muscle in my mind as a senior manager, which is important to me now as my organisation has employees in 62 different countries. Cultural diversity and gender equality in the workplace are key to successful, balanced decisions in today’s economy,” says Damian.

A typical EMBA class at NBS has 30 to 40 people from about 20 sectors and 15 nationalities. The average age of participants is 41 and they have about 17 years of experience. Under a “hybrid-learning” model introduced this year, Singapore-based participants can attend classes in person, while those who live overseas can join the same lessons remotely via Zoom.

Having worked in banking for many years, Damian believes the Nanyang EMBA programme – through its diverse content, faculty and class cohort – provides financial executives with broad exposure to other industries. “If you deal with clients, internally or externally, it will help you understand and empathize really unlock the potential of your interactions to understand how you and your bank can truly add value.” he explains.

Transforming the careers of senior leaders

Damian says the programme helped transform him from being an “senior engineer” to a “global leader” at his bank. “This would have been a difficult transition without the Nanyang EMBA. It required discussing issues from people outside my organisation and having exposure to opinions outside my industry. NBS provided a safe framework for this, for debating and testing new ideas, so that I could grow in confidence as a leader,” he says.

Participants receive leadership coaching throughout the programme and take part in Strategy Projects at Nanyang (SPAN), in which they act as consultants to address critical challenges faced by external organisations participating in the initiative. “This is a unique opportunity to hone your consultancy skills, apply what you’ve learned on the EMBA to help solve real-world business problems. Under the guidance of experienced faculty and senior company sponsors students flourish,” says Geoffrey.

Damian says he enjoyed the “entrepreneurial nature” of the programme, which included an exercise in which he teamed up with classmates to pitch a new business to investors. “As well as improving negotiation and financial management skills, the Nanyang EMBA taught me that it’s ok to fail fast and learn from our mistakes – that’s something technologists tend to forget. Since finishing the degree I’ve taken on a more entrepreneurial mindset, so I’m able to consciously make calculated risks and often predict the outcome with financial modelling to back up my recommendations,” he explains.

Now, when Damian meets other global heads of departments at his bank, he has a better idea of the issues they are facing and can engage with them with his dual business/technology hat on. “I know the key questions they’ll ask and what motivates their thinking. Now, I don’t believe they just see me purely as a technologist but as a partner. The Nanyang EMBA has empowered me within my organisation and driven me forward into a broader role, with a bigger budget, and the ability to transform the bank, build my own team and pass on insights to lead others,” says Damian.

Geoffrey says hearing stories like Damian’s inspires him on the job. “Our EMBA participants are already experienced leaders when they come to NBS, but they emerge from the programme with an even wider range of skills, ready to thrive in the new digital economy,” he adds.