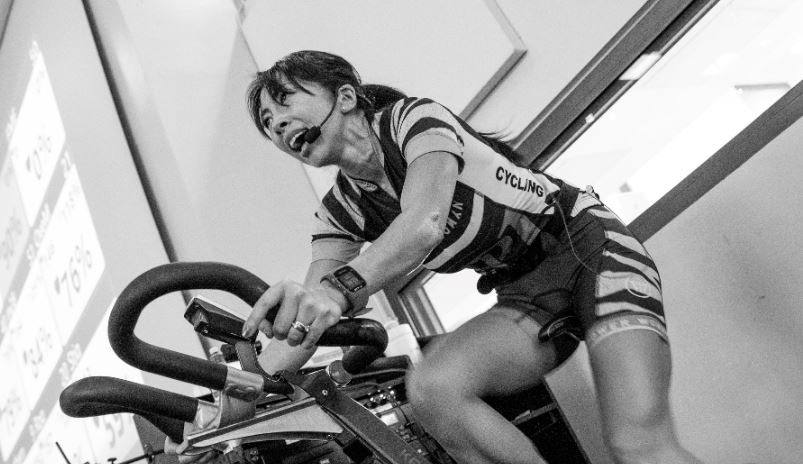 Indications this week are that juniors in finance are coming around to the latter option. No amount of money can justify a job that destroys your health.

It started with the revelation that associates have been resigning from their $450k a year jobs at Apollo Global Management after persistent 20-hour days, and it segued into the Goldman Sachs presentation from analysts complaining that they're being made to work 100 hour weeks.

As we reported today, Goldman is being sympathetic to its analysts' complaints and is attempting to police their working hours more closely and to reduce their workloads. However, Jefferies has already upped the ante.

In an email sent to staff yesterday and subsequently posted on Instagram, Jefferies' CEO Richard Handler and President Brian Friedman said they're providing all analysts and associates at the firm with the option of either a free Peloton bike, a MIRROR home work out subscription, or an Apple watch package as thanks for all their hard work during the pandemic.

The gift was interestingly timed after the Goldman presentation, although Handler said it been "in works for weeks." 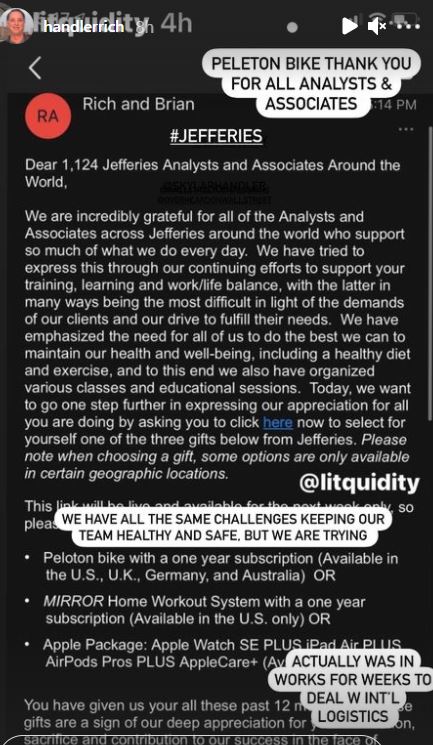 Even so, other banks are undoubtedly having a long hard look at how they can attract and retain juniors with lifestyle perks too. Following last year's late rush of M&A deals and the ongoing SPAC frenzy, it's not just Goldman Sachs that has begun 2021 understaffed. Logan Naidu, CEO of London recruitment firm Dartmouth Partners, says the market for junior bankers is currently, "hugely competitive" as banks and buy-side firms compete for talent.  Many analysts have "multiple opportunities," he says.

In this kind of market, Goldman's analyst complaints have the potential to be a catalyst for the kind of changes last seen after the death of intern Moritz Erhardt in 2013. In the years that followed Erhardt's death, banks introduced multiple programs to reduce working hours, including 'protected weekends' and a request - at Goldman Sachs - that interns stop work at midnight and don't reappear in the office until at least 7am.

With juniors working from home during the pandemic, many of these initiatives seem to have fallen by the wayside. Appealing to graduates might mean reinstating them - as Goldman is now attempting to do. However, Naidu observes that the ease with which the time-off rules were overruled suggests that banks still have significant issues with their culture: "You can put these rules in place, but it makes no difference if they're not properly enforced."

Ultimately, the banks everyone wants to work for may not be those offering sports equipment or eight hours' sleep once a week, but those with a reputation for ongoing care of their employees. Here, Morgan Stanley is frequently cited as a market leader. Interestingly, Morgan Stanley was also one of the only banks not to enforce a mandatory time off policy after Erhardt's death. The implication was that it didn't need to.

Photo by Erlend Ekseth on Unsplash